Answering the Call for Jury Service

Jury service is a unique privilege of being a U.S. citizen. In NCSC's latest education video, learn who’s eligible, what to do when summoned, and what happens when you’re selected. Learn how to do your part. And remember, a fair trial starts with you! 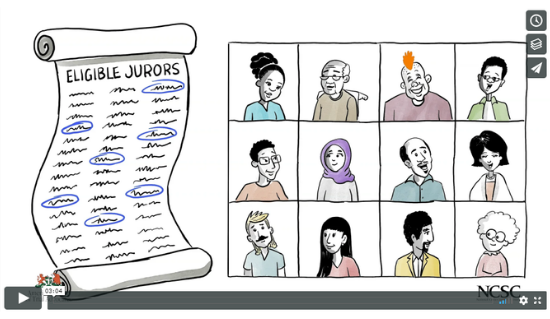 This week Chief Justice Tani Cantil-Sakauye announced the creation of a working group to scrutinize the effectiveness of Batson rules designed to avoid racial, gender, and ethnic discrimination during voir dire.  In 2013 Washington State completed such a study that resulted in the promulgation of new rules.  Connecticut is beginning a similar effort.

The Tasmania Law Reform Institute's recommendations are based upon a premise that education by Tasmanian courts is key to ensuring jurors understand why they are being asked to limit their Internet use and to encourage self-regulation during the period of the trial for the benefit of the accused, and the justice system more generally.  The Institute finds there is no way of effectively segregating jurors from the wider online community because of the prevalence of Internet-connected smartphones. Many people are, nowadays, so used to continuously sharing their life online and accessing information via the Internet, that it takes some energy and effort to break these habits. Many jurors simply don’t appreciate the consequences of such behavior in the context of their role and obligations as a juror.  The report can be found here under the tab “Juries & Social Media.”  An animated instructional video is available here.

The fall/winter 2019 issue of Voir Dire, the journal of the American Board of Trial Advocates, features an article describing new procedures for jury trials in simple civil cases.

In a 4-to-1 decision, the Florida Supreme Court overturned that court’s prior decision outlawing majority jury decisions regarding imposition of the death penalty.  Before this decision, only Alabama authorized a less-than-unanimous jury decision on imposing death.  The lone dissenter and former member of the Conference of Chief Justices stated, “In the strongest possible terms, I dissent. Death is indeed different. When the government metes out the ultimate sanction, it must do so narrowly and in response to the most aggravated and least mitigated of murders. . . . [T]his Court has taken a giant step backward and removed a significant safeguard for the just application of the death penalty in Florida."