This compilation was created from a survey of state language program managers who shared information about their VRI service vendors. The solutions these companies offer include VRI equipment and VRI interpreter services. Each company was interviewed to create these profiles detailing their contact information, web address, products and services.

Also included is a glossary of technical terms that are relevant when discussing VRI technology services with vendors.

The information included below will be updated periodically as providers and language program managers  share more information on VRI solutions with  NCSC. If you have information you wish to share, please send it here.

How to estimate business broadband needs 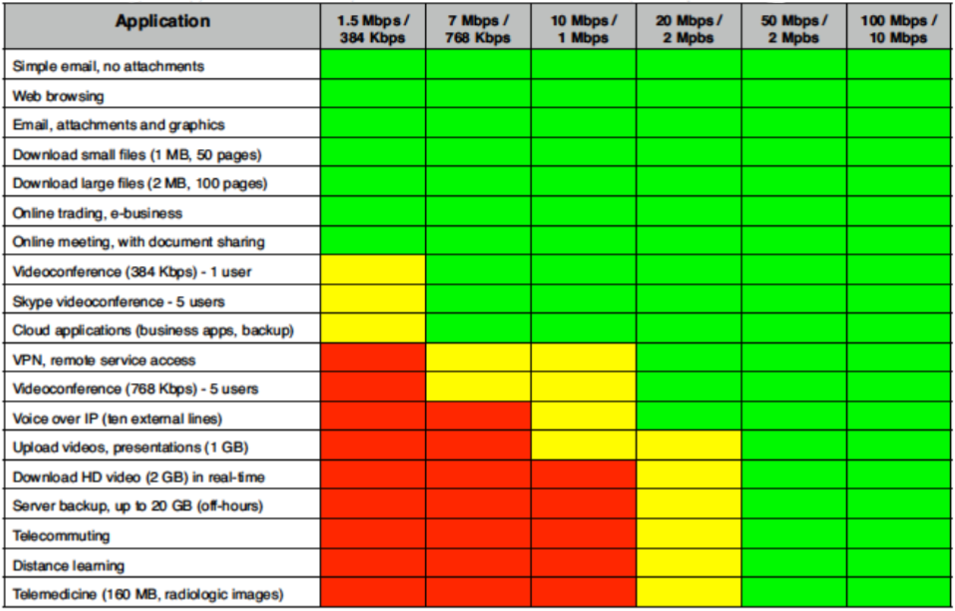 Table adapted from "The Impact of Broadband Speed and Price on Small Business."

Analog: term used to describe any system based on continuous data or events. When used in reference to data storage and transmission, analog format is information that  is transmitted by modulating a continuous transmission signal, such as amplifying a signal's strength or varying its frequency to add or take away data, e.g. telephones take sound vibrations and turn them into electrical vibrations of the same shape before they are transmitted over traditional telephone lines. The opposite of analog is digital.

Audio Mixer: a device that accepts “inputs” from multiple separate sound sources combines them in a customizable way and then “outputs” the result, typically to speakers or a recording device.

CODEC: software that takes a raw data file and turns it into a compressed file. Because compressed files only contain some of the data found in the original file, the codec is the necessary “translator” that decides what data makes it in to the compressed version and what data gets discarded.  Codec is a short name for “coder-decoder” or “compression/decompression.”

Consecutive Interpreting: the mode of interpreting used where the interpreter renders statements made in a source language into statements in the target language intermittently after a pause between each completed statement in the source language.  This mode is used in all question and answer settings such as witness testimony, where simultaneous interpreting is not feasible, and when the interpreter is not skilled in simultaneous interpretation.

Dial-Up Internet: internet service that uses the facilities of the Public Switched Telephone Network (PSTN) to establish a dialed connection to an ISP via telephone lines. The user's computer or router uses an attached modem to encode and decode IP packets and control information into and from analog audio frequency signals, respectively.

Digital: any system based on discontinuous (not continuous or having breaks, e.g. computers) data or events which handle data in digital form, requires modems to turn signals from digital to analog before transmitting those signals over communication lines such as telephone lines that carry only analog signals. The signals are turned back into digital form (demodulated) at the receiving end so that the computer can process the data in its digital format. The opposite of digital is analog.

Digital Subscriber Line (DSL): a wire line transmission technology that transmits data faster over traditional copper telephone lines already installed to homes and businesses. DSL-based broadband provides transmission speeds ranging from several hundred Kbps to millions of bits per second (Mbps). The availability and speed of DSL service may depend on the distance from the business to the closest telephone company facility. DSL service is asymmetrical (ASDL), with the bulk of the bandwidth reserved for receiving data, not sending it.  (See SDSL)

Digital Subscriber’s Line Access Multiplier (DSLAM): a network device (usually at a telephone company central office) that receives signals from multiple customer DSL connections and puts the signals on a high-speed backbone line using multiplexing techniques. It acts as a switchboard for local DSL clients, routing requests and responses between each client’s computer address and the internet.

Ethernet: a type of connection between computers that forms the basis of most Local Area Networks (LAN). It generally covers only a single building or premises that are close to each other, but Ethernet networks may span tens of kilometers.  Ethernet allows many computers to connect to one another into a network with the help of special hardware and protocols.

Integrated Services Digital Network (ISDN): a set of communications standards for simultaneous digital transmission of voice, video, data, and other network services over the traditional circuits of the public switched telephone network. Prior to ISDN, the telephone system was viewed as a way to transport voice, with some special services available for data. The key feature of ISDN is that it integrates speech and data on the same lines, adding features that were not available in the classic telephone system.

Internet: a massive interconnection of computer networks that spans the globe.  It is comprised of millions of computing devices that trade volumes of information. The internet houses many layers of information, with each layer dedicated to a different kind of documentation.

Internet Protocol (IP) Address:a unique numerical address that every computer on the Internet has which is used to route packets to the computer (or cell phone, etc.) across the Internet. IP addresses are usually written and displayed in human-readable  notations, such as 172.16.254.1..

Internet Service Provider (ISP): a private company or government organization that connects a consumer into the internet around the world for a fee.

Intranet: a generic term for a collection of private computer networks within an organization. An intranet uses network technologies as a tool to facilitate communication between people or workgroups to improve the data sharing capability and overall knowledge base of an organization's employees. Intranets utilize standard network hardware and software technologies like Ethernet, Wi-Fi, TCP/IP, Web browsers and Web servers. An organization's intranet typically includes internet access but is firewalled so that its computers cannot be reached directly from outside the organization.

Limited English Proficient (LEP): LEP individuals are persons whose first language is other than English and have a limited ability to read, write, speak, or understand English either because of where that person is from (national origin) or because of a disability.

Modem: an electronic device that converts a computer’s digital signals into specific frequencies to travel over telephone or cable television lines. At the destination, the receiving modem demodulates the frequencies back into digital data. Computers use modems to communicate with one another over a network. “Modem” is short for modulator-demodulator.

Network: a group of two or more computer systems linked together.

Peer-to-Peer System: a network made up of two or more computers pooling individual resources such as CD-ROMS, disk drives and printers together. Each computer acts as both the client and the server and communicates directly with the other computers on the network.

Protocols: layers of information dedicated to different kinds of documentation. The most popular protocols are the World Wide Web, instant message, and email.

Quality of Service (QoS): an industry-wide set of standards and mechanisms for ensuring high-quality performance for critical applications. The goal of QoS is to provide preferential delivery service for the applications that need it by ensuring sufficient bandwidth, controlling latency and jitter, and reducing data loss.

Router: a device that typically works in combination with a modem and acts as the traffic cop for network signals flowing into a location. A router can be wired, wireless, or both.

Server: a computer or device on a network that manages network resources. For example, a file server is a computer and storage device dedicated to storing files whereby any user on the network can store files on the server.

Symmetric Digital Subscriber Line (SDSL): high-speed internet access service with matching upstream and downstream data rates. Data can be sent to the internet from the client machine or received from the internet with equal bandwidth availability in both directions.

T1 Lines:  ("T-carrier line”) a type of broadband connection used to connect to the internet. A T1 line uses a highly advanced method of transferring data with the ISP. Advantages of using a T1 line include constant speeds and highly secure connections, though a downside is that most T1 lines have very high monthly subscription charges associated with them. A T1 line uses a specific type of telephone line that can carry more data than standard telephone phone lines. T1 lines can be made from twisted copper or glass fibers (also known as fiber optics). Twisted copper and fiber optics allow larger amounts of data to be transferred than normal copper wires used with a DSL or dial-up connection.

Transmission Control Protocol (TCP)/Internet Protocol (TCP/IP): two distinct network protocols; TCP and IP are so commonly used together that TCP/IP has become standard terminology to refer to either or both protocols. IP corresponds to the Network layer (Layer 3) in the OSI model, whereas TCP corresponds to the Transport layer (Layer 4) in OSI. In other words, the term TCP/IP refers to network communications where the TCP transport is used to deliver data across IP networks. The average person on the internet works in a predominately TCP/IP environment. Web browsers, for example, use TCP/IP to communicate with Web servers.

Videoconferencing: to conduct a meeting or conference between two or more participants at different sites by using computer networks to transmit audio and video date.

Video Remote Interpreting (VRI): the process of providing interpreting services via video or web cameras and telephone lines with an off-site interpreter.

Voice-Over Internet Protocol (VoIP): a form of communication that allows the consumer to make phone calls over a broadband internet connection instead of typical analog telephone lines. Basic VoIP access usually allows a person to call others who are also receiving calls over the internet. Interconnected VoIP services also allow a consumer to make and receive calls to/from traditional landline numbers, usually for a service fee. Some VoIP services require a computer or a dedicated VoIP phone, while others allow the consumer to use a landline phone to place VoIP calls through a special adapter.

Wireless Fidelity (Wi-Fi): a wireless networking technology used across the globe. It refers to any system that uses the 802.11 standard, which was developed by the Institute of Electrical and Electronics Engineers (IEEE) and released in 1997. In a Wi-Fi® network, computers with Wi-Fi® network cards connect wirelessly to a wireless router. The router is connected to the internet by means of a cable or DSL modem typically.

World Wide Web (Web): a way of accessing information over the medium of the internet. It is an information-sharing model built on top of the internet. The Web uses the HTTP protocol, only one of the languages spoken over the nternet, to transmit data. Web services, which use HTTP to allow applications to communicate in order to exchange business logic, use the Web to share information.

Webcam: a video camera which feeds its images in real time to a computer or computer network, often via USB, Ethernet or Wi-Fi.  Webcams are known for their low manufacturing cost and flexibility making them the lowest cost form of videotelephony.